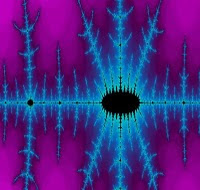 Some men have always not believed in Chaos, known
that somewhere deep in Earth's unfathomable lockers,
locked away, marked "not to be revealed"
there were these complex patterns,
far beyond the reach of human understanding, to explain
how angels visit people in the night;
how simple sequences of numbers
can set the world alight;
how fractals, endlessly repeating
simple functions that we mastered back at school,
are diagrams and metaphors,
the alchemy of chemicals
from the powerhouse of the world.

When men like Koch and Mandelbrot ascended to the heights
and when they saw the peaks sunlit above the mist,
each peak in the next peak concealed, revealed, extending
to infinity, they knew they'd found the ancient stone
for turning simple plots to gold, and letting bleed a new eternity
into a world grown big - a stone that some had long since sensed.
Small voices warned, we may suppose, of "Only half a story - what
if we have only heard the ocean in a shell? If lower down,
below the mist, the complex plane that holds these mountains
in its hands, that fashioned them and told them where to stand,
what if its turbulence hides greater mysteries than these;
what if it holds the unifying thread that must not be unravelled;
the end, the hope, the consummation of our science and our story?" 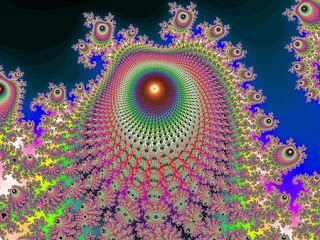 You've captured Chaos and the realities, or not, of our knowledge perfectly.

An interesting and very cool view of what we know and what we do not understand. The keys to the kingdom are still out of reach.

Gorgeous piece of writing, Dave. Are there truths we will never
understand? I believe, so. Love the fractals.

First stanza stands alone , but with the second added... it just becomes so intense... brilliant!

I'm in complete agreement with Stan. The first stanza can stand alone, but with the second, kaching! From chaos to the alchemy of chemicals, I'm sure we've heard less than half the story. I love to believe that magic is afoot. Magic being those unanswered questions.
~Brenda

I cannot make an intellectual comment about this poem as much as I wish to do, no ... I can only share the sense of amazement and wonder that it provided me. Thank you!

Isabel
Much obliged for the comment. I was saying both, but most emphatically, the second.

anthonynorth
And that sums up the dilemma beautifully, I think. Thanks.

Tabor
Indeed - but are we getting closer - to the theory of everything, for instance?

Stan
Thanks very much for those kind words.

brenda
Welcome to my blog and my sincere thanks for the comment. There's more in this than meets the eye!!! (or brain)

Liz
That's a wonderful response. Thanks so much for it.