Tim's first sketch developing the concept for his apparatus. 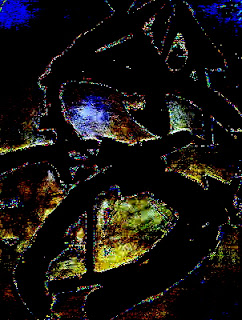 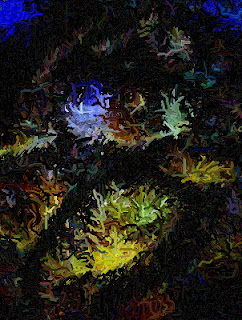 Two more drawings from Tim's write-up of the experiment.

A science project - so he said - pinch of salt, I thought.
Would you be fooled? Homework assignment - yeah,
he said that too. A likely story. Wait and see,
I thought. Just wait and see! Didn't seem
to make much sense. Tangle of metal pipes,
odd bits and bobs, part of a bunsen burner,
a magnetic coil or two, transducers off the dump,
condenser parts and stuff I couldn't recognise.
Oh yeah, a clockwork gubbins and a hook-shaped tail -
the tail wagged by the gubbins - to what end
I couldn't tell. The whole set out in something like
a love knot and a figure eight. As to the grand plan,
though, he wouldn't say - like he'd been sworn
to secrecy. Wouldn't say, more like! Let's wait and see!

Several days went by and Tim was playing with his toy
beside an open window, the way he'd done each day
since he had brought his notebook home from school.
A lovely day it was an' all, but then dark clouds blew up.
I took him in his cup of tea  just as the first cloud streamed
in through the open window, only to be stopped - for so
it seemed - within the large loop of his apparatus. Outside,
the world was changing - being changed - the sky becoming
an assemblage of black tube-shapes and psychedelic
fluffy balls, the former heading for our window at a rate
of knots, the latter bouncing everywhere across the sky
and over the horizon. The tubes, it seemed were being
pulled or sucked towards us by Tim's mechanism -
but not just that: birds, lady birds and beetles, leaves
and tiny things in hundreds at a time had found themselves
caught up in it and drawn in through the open window to be
processed in the coils of Tim's Leviathan. And all of them
departed this reality as puffs of smoke or flame. As I
put down the cup I saw the dark cloud-tubes and patches
of unnatural colour burst into flame and set the sky alight.
Beyond the conflagration all was a flat black. Only as
the early waves of terror left us as we realised we were
still here... only then did any of us realise that nothing
from the outer world had been destroyed, but all had changed,
put on new livery, was smaller, larger, transfigured
each in its own way as if the change had been designed for it.
...............................................................................................
I am indebted to The Mag for the original image and the inspiration behind this post.

All
A word of apology for having been forced to introduce word verification. As you may have noticed I have been somewhat swamped the last couple of posts by unwanted tripe, some of it offensive.

This reminds me of a movie, Dave... loved it!

This reminds me for some reason of the book and movie 'The Time Machine' What a great imagination. For the boy to invent something from scrap and turn it into something so monumental it changes the world. :)
Another fabulous read.

Hi Mr Dave,v.good description.and its ok with the story stuff actually i was very excited to read that story.

nice....fascinating story dave....it captures the imagination in ways that remind me of my youth

Direct line to a dream.

You took us on a journey to another dimension ... wonderful experience!!

word verification is a small price to pay for your poetry!

Very interesting this sketch of the time machine, I suggest an eye looking over time. Greetings.

Truly wonderful write Dave - you took me there!

What a visionary intensity.

It is quite obvious that you have been a teacher of young people Dave and that over the years you have learned to get into their minds. Well done.

"drawn in through the open window to be
processed in the coils of Tim's Leviathan. And all of them
departed this reality as puffs of smoke or flame."

The best special-effect I have enjoyed in some time!


And what a name for a band, or novel:
'Tim's Leviathan'

Sorry for the loud music on my post today!
Won't happen again ;-{ Been taken down

Such vivid images. I love it Dave.

All
It looks like word identification didn't work, so I am going to have to try moderation for a while. Humble apologies everyone.

jane
Many thanks for this.

Laurie
Thanks Laurie. Much appreciated.

sunny
Thanks a lot. Glad you liked it.

Brian
Great compliment that, reminding someone of their youth! Thanks for.

Helen
Thank you SO much for that last remark. Very much appreciated, but it seems that for a while I shall have to go further - with great reluctance.

hyperCRYPTICal
Thank you for these kind words.

Tommaso
Thanks for saying this.

The Weaver of Grass
I really do appreciate this comment. Much thanks for it.

Wayne
Hi, welcome to the blog and many thanks for the feedback.

cloudia
Thanks for such a great comment. Really encouraging.

Such a wonderfully imaginative story. How I enjoyed reading it.
It was much more entertaining than most of the sci fi movies I've seen, and I loved the delicious sense of unease it evoked.
Brilliant:)

Hi again Dave,
just wanted to say how sorry I was to hear about the problem you've been having with unwanted comments.

Makes me so angry to think that jealous morons think they have the right to verbally attack such a talented writer.

I apologise for using such strong words. Please feel free to delete this if you wish, but I just HAD to voice my disapproval!