For a few blissful years in my early twenties I was a frequent visitor of the London art galleries. Not many days would pass without me wandering into one of the big ones or several of the small commercial galleries. During that time I would occasionally come across a painting by Frederick Cayley Robinson, though as I recall it now, such an encounter became more and more a rarity as time went by.

He was never a household name and I would think few people these days would have heard of him. In those days I suppose you could have said he had something of a cult following, would have been known to a close circle of fans, to those who collected and exhibited his work and maybe a few more. A few more because, inexplicably, he was awarded a show at The National Gallery. Indeed, as a result of that he became known as the least well-known artist ever to show there. However, the show must be one of the two events which helped prevent him being completely forgotten. The other was the acquisition by the Wellcome Library of what must be regarded as the jewel in his crown, the four panels of his mural Acts of Mercy, a work that puts me in mind of that of Mildred Elsie Eldridge , my first in this mini series of Forgotten Artists. They have something of the same clear-cut quality. 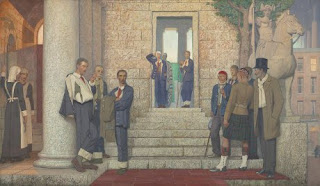 The quality comes from a different source, though. Cayley Robinson was a passionate sailor and after graduating from The Royal Academy Schools he spent some years sailing round the British coastline. Later still, he settled in turn in three Cornish seaside resorts: Newlyn, Lamorna and St Ives. 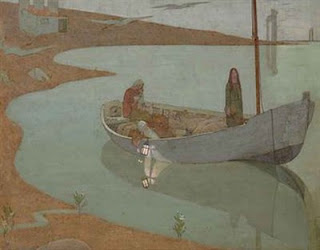 I think the strange Cornish coastal light is clearly to be seen in many of his paintings and most clearly in Acts of Mercy. But there was possibly a yet more powerful influence: for a time he studied at the Academy Julian in Paris and there he became much influenced by the works of Burne Jones and Puvis de Chavannes , as a result of which latter influence his paintings took on a flat faux tempera style. It was during this period, too, that he developed symbolist aspects to his work, something he was not to share with Mildred Eldridge.

It is something of a strange coincidence, though, that they should both be best known for a mural of four panels painted for a hospital, in his case commissioned for The Middlesex Hospital in London. Also, like her, he was an illustrator as well as a painter, though that is not unusual, of course. There, though, I think the similarities end. Not everyone was - or is - as drawn to Cayley Robinson's work as I am. Many find them strange, the figures trance-like, melancholic and full of some strange wistfulness, even longing. Yet I have called them clear-cut. They have cool, even cold, clear tones and the figures seem to have been almost mathematically calculated and positioned within clear outlines. Yet always there is a touch of nightmare, a feeling that a perfect beauty has been just slightly marred, a crystal-sharp clarity smudged. That, I think, is what first drew me to his work as I am sure it is what most repels many. The few landscapes I have seen were also of the nightmare variety, though not crudely so. There would be nothing obviously out of the ordinary - except the slight shiver that ran down the spine.

The mural, The Quality of Mercy which I have already mentioned, is no exception. It shows a crocodile of orphans queuing for their bowls of milk or gruel or whatever. They all wear the same starched uniforms, as though they are nurses or orderlies. The scene is everything such a scene should be - in the eyes of some. It is serene and well-ordered, nothing and no-one out of place. Disciplined and well-behaved. Except that one of the orphans exerts her independence - by breaking through the picture's frame, in point of fact. It has been claimed that many a young nurse upset by the never-ending confrontation with death, would take solace from this figure and identify with it. The orphans queuing on a staircase look ike they might be descending into hell. They could hardly look more despondent. Desolate even.

Two other panels show the exterior of the hospital and soldiers, casualties from the First World War, being treated. They, too, are lacking individuality, being dressed in the convalescent blues of the period. The panels were all painted between 1915 and 1920 and were a feature of the entrance all until 2007.

However, it should not be thought that there is nothing else in his oeuvre to compare with the murals. That he was a passionate sailor I have already mentioned, and many of his earlier works had to do with the sea and with ships. Then from 1898 to 1902 he studied in Florence, studying the works of Mantegna, Giotto and Michelangelo, as a result of which his style underwent a radical transformation. Somewhat
surprisingly, however, his interest in all things nautical survived in the light-toned, flat, schematic style which he had developed.

The milestones to his career were more than might have been imagined: an exhibition at the Royal Academy, RWS and ARA, a Professorship at The Glasgow School of Art, publication of his work in an extra winter edition of 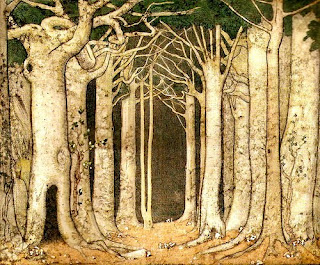 Studio magazine, and although today it could not be said that he is as forgotten as Mrs RS Thomas, his reputation and status is in sad decline, no doubt in large part due to the low esteem in which symbolist painting is held.

What an extraordinary artist. I love the clarity and colors. Thanks for the introduction.

Thanks for introducing me to Frederick Cayley Robinson. Marvelous work.

I had not heard of the artist nor had I seen any of the paintings - I particularly like the trees Dave.
We learn something new from blogland every day thanks to posts like this.

Thanks you so much for posting this- I had not heard of Fred either. Love the orphans the best, the light is delicious! The shadows and the colours! YUM! Thank you!

The third painting reminded me of The Poor Fisherman by Puvis de Chavanne.

David
I thoughht so, when I first saw his work.

The Weaver of Grass
Yes, I must confess I had not seen any originals like it, though I have seen a few which gave the same eerie feeling.

Linda Sue
The light makes it, I agree.

The light in the first image certainly makes it very different to the hospital entrance, where the lassitude seems even greater.
£60.50 for a party balloon would put a dampener on things!

I am new to this artist also. Thanks for bringing his extraordinary work to our attention, Dave!

Oh, those trees. They look as though they've seen a thousand surprises.

Strange - I thought I'd already left a comment thanking you for introducing me to this extraordinary painter. Oh well, consider it done now! As for Mrs R.S. Thomas, she gets quite a puff in Byron Rogers' RST biog, 'The Man Who Went Into The West'.